Horse owners and farmers are counting their losses and celebrating tales of survival after the Gympie region was inundated with up to 650 millimetres of rain over the weekend.

“It’s just come down in such a hurry that no-one was prepared for it,” Tansey resident Julie Cunningham said.

“There’s lots of losses everywhere in the district … it’s devastating.”

Ms Cunningham, who is the secretary of the Tansey Show Society, said it had been a horrific few days with many horses stranded at the showgrounds.

“There are dead horses here on the grounds.”

Amongst the heartache, there are some good news stories including a stallion that survived against all odds.

“The polo fella, he got three of these mares on his truck Friday evening, and by the time he went to go back to get the others he couldn’t find some of them,” Ms Cunningham said.

“He spent the night over in one of the yards trying to save the stallion. He thought he’d lost him.”

Rescued on Saturday morning, the man thought he had lost everything until the stallion was found in the yard still alive.

“He’d (the stallion) been treading water for probably 10 hours and quite well you know, he was still in good spirits that horse and doing well,” Ms Cunningham said.

But the excitement was bittersweet with many people losing horses in the weather event.

“They’re not only your best mate, they are your family, so when you lose one it is heart-wrenching.”

Community spirit has been a common thread running through many incredible stories of survival in Tansey.

Emma Hafey, of Jaylan Downs Australian Stock Horse Stud, was reunited with a broodmare after people swum with it to the showgrounds.

“We had some friends in the community that actually swum up to chest height [in water] to save her and get her off the verandah and bring it back home,” she said.

Many horses were found on Saturday morning after treading water all night. 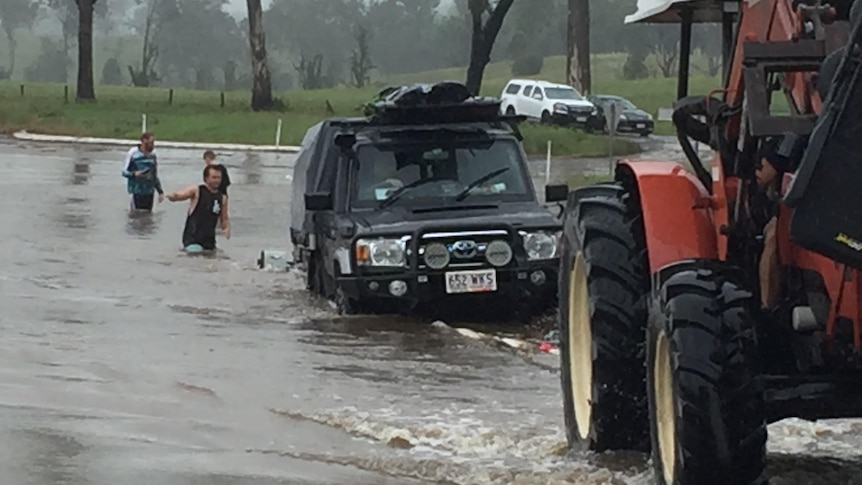 A Brisbane family of four say they and five others survive rising floodwaters by tying their tinny to a power pole in the middle of the night.

One colt was found downstream in the river with no traces of its mother or owner.

Ms Hafey has placed the young horse with her broodmare.

“We’re hoping that she’ll accept him and be his mum now,” she said.

“They’re obviously very tough animals because we’ve found some a long way from where they were.

“They’ve gone through a lot and for some of them, they’ve come out very good on the other end.”

Despite everything they have been through, the Hafey family have helped return lost cattle to Alex and Robyn Barsby.

The Barsbys, who run a cattle property at Tansey, were shocked to receive 406mm of rain in just a few hours.

“We had about 120 head, that’s cows and weaner calves missing, but we’ve got quite a few cows back but not a lot of calves,” Ms Barsby said.

It was only with the morning light that the couple realised just how much water had inundated their property.

“Just absolutely astronomical. My husband was saying that when he went down the flat there at one stage there were waves six foot high of the rush of the water.”

Some of their cattle have been found alive seven to 10 kilometres downstream.

“We’ve got a couple in the yard. One’s got pneumonia and one’s got a cooked shoulder but most of them are pretty good,” Ms Barsby said.

“Cattle are amazing. They get in the floodwater and they just drift you know, so luckily they haven’t been caught up in fences or caught up in trees.”

For Ms Barsby the silver lining has been seeing the community band together in the recovery effort.

She said people travelling from Brisbane meant a lot to her.

“It happens all the time with floods and fires, everybody just gets together, it’s the Aussie spirit.”