‘THIS IS MY FINAL STRAW’: Aussie quits after boss’ Covid-19 email 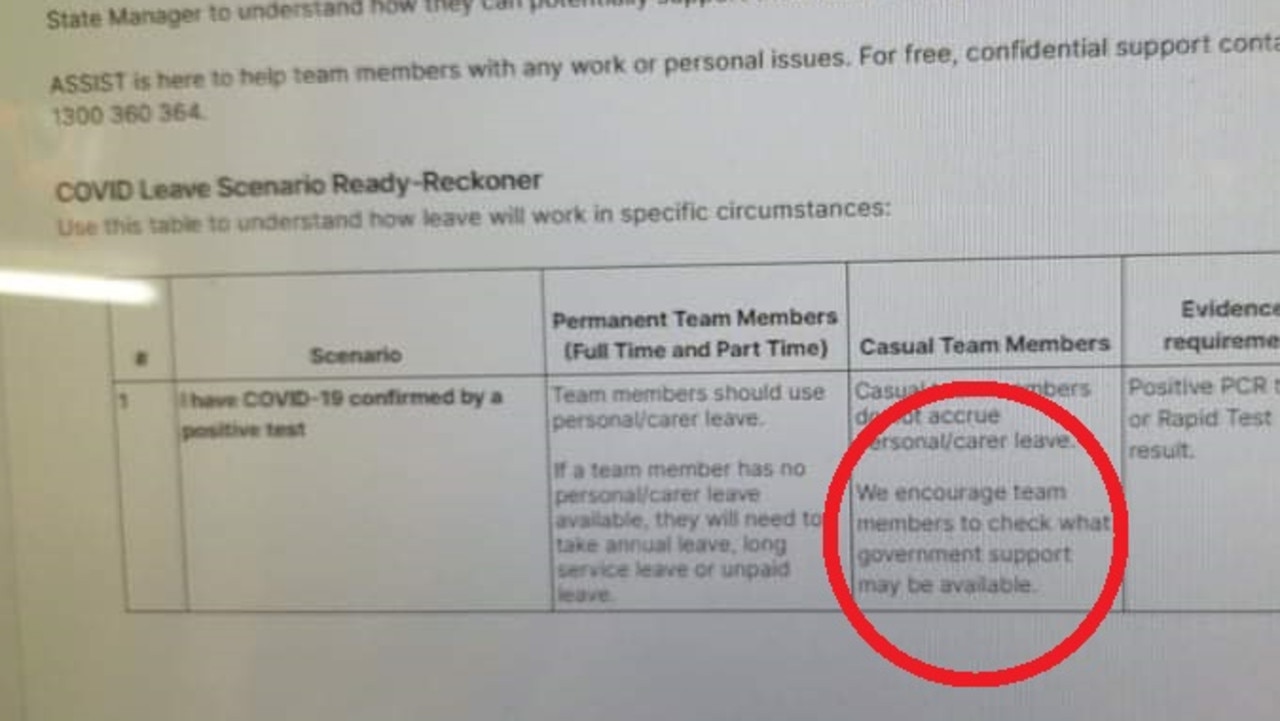 An Aussie worker embracing the “antiwork” trend has revealed an email from their employer that was the “final straw”, as experts warn of mass resignations.

Over the weekend, an employee of hospitality giant ALH shared an email from the company informing staff of their leave entitlements if they contract Covid-19.

For casual staff who “do not accrue personal/carer leave”, “we encourage team members to check what government support may be available”.

“I’m sick of being abused and used by corporations,” wrote Reddit user BoxerDuckling, who posted the image to the site’s popular “antiwork” forum on Saturday.

“This is my final straw. I’ll figure out new prospects next week.”

The user, who said they were a casual worker at a bottle store, added that ALH had not provided enough support “for us employees to deal with difficult customers”.

“We often have people come through who refuse to wear masks, or just don’t,” they wrote.

“I’m not about to get my life threatened by a mob of angry drunks, not wanting to wear a mask. It’s an extremely difficult situation. And the reality I have to face, as well as others. I felt more confident knowing I wouldn’t have to worry about money if I got sick regardless – but now it’s a threat to my livelihood, and my co-inhabitants.”

Antiwork, a movement which advocates for employees to abandon the “modern day workplace” and prioritise their “individual needs and desires”, has rapidly grown in prominence over the past two years as the coronavirus pandemic has forced many to rethink their careers.

It is particularly popular in the United States, where people working across all industries are leaving their jobs like never before – a record 4.5 million Americans quit in November, the Labor Department revealed last week.

The Job Openings and Labor Turnover Summary showed labour force participation – the percentage of the working-age population either employed or actively looking for work – remained below pre-pandemic levels, despite record job openings.

The trend has been dubbed “The Great Resignation”, or “The Big Quit”.

A similar movement in China, “Lying Flat” – essentially doing the bare minimum to get by – is becoming more popular among young people, sparking concern in Beijing. Chinese state media have dubbed it “shameful”, and internet censors are cracking down on discussion of the trend.

While some experts have warned of a similar “Great Resignation” trend in Australia, others say such predictions are overblown.

“The issue here is not so much a Great Resignation, but how to deal with a Great Resistance to the idea of returning to the office, and the daily commute,” Mark Wooden and Peter Gahan from the University of Melbourne wrote for The Conversation in November.

A lengthy post from an Australian user on Reddit’s antiwork forum on Monday suggested just that.

“Tomorrow I’m being forced back to work, five days a week,” user Ramen_Juice wrote, saying they were “lost for words” given skyrocketing Covid-19 case numbers.

“I enjoyed the balance of working from home – I get to save money and time on transport, I get to do chores and other household stuff while I’m waiting for email replies, better work setup, I get to prep meals before the girlfriend gets back, etc.”

One person replied: “Mate, stop asking and start telling. Don’t say, ‘Is it all right?’ They will always say no. You say, ‘Just letting you know that I will continue to work from home.’ The time of letting bosses dictate our lives is over.”

Since October 2020, the antiwork subreddit has ballooned from 180,000 members to nearly 1.6 million, with people on the forum – who refer to themselves as “idlers” – sharing stories of being “abused” and “exploited” by employers.

“Antiwork has long been a slogan of many anarchists, communists and other radicals,” the section explains.

“We’re not against effort, labour, or being productive. We’re against jobs as they are structured under capitalism and the state – against exploitative economic relations, against hierarchical social relations at the workplace. The point of r/antiwork is to start a conversation, to problematise work as we know it today.”

The most popular posts, in some cases attracting more than 10,000 comments, are screenshots of resignation emails or text message exchanges – some of which are accused of being faked.

“As you know, I found out yesterday my dad passed away,” one person wrote in a purported text message to their boss, after being asked why they did not show up to work. “I am so sorry for any inconvenience this will cause you.”

“My uncle died a few days ago, I lost my grandma,” the boss wrote back. “Stop being a victim.”

The user replied, “Mail me my cheque. I quit. And go f**k yourself.”

A December 2021 survey of 12,689 of the forum’s members found more than three quarters were based in North America and fewer than 3 per cent in Australia.

The users were largely male at 60 per cent, with people aged between 25 and 34 making up the bulk at just under half, and around two thirds said they were employed full-time.

Doreen Ford, a moderator of the forum and early pioneer of the antiwork movement, told the Financial Times she spent 10 years working in retail stores around Boston and hated it.

At the suggestion of her grandmother, she gave up her traditional job in 2017 and now walks dogs part-time.

“Usually, at best, [working was] pointless,” the 30-year-old told the newspaper.

“And at worst it was degrading, humiliating and exploitative. I think there’s a lot of positions that just don’t make any sense, that do not have to exist. You’re just pushing around papers for no good reason. It doesn’t really help anybody.”

Ms Ford said many who had stopped working operate their own microbusiness like her, or work as few hours as possible in part-time jobs to survive, while reducing their cost of living by taking on roommates or going dumpster-diving for food.

“Most of us are just normal people,” she said. “We have jobs that we don’t like, which is the whole point of why we’re in the movement to begin with.”

Companies across the United States, from McDonald’s to Amazon and FedEx, have reported difficulty attracting workers, despite higher wages.

Many have turned to offering perks such as college tuition, sign-on bonuses and even free iPhones to entice young employees.

While it’s unclear to what extent cultural trends such as antiwork are contributing to issues in the jobs market – as opposed to other factors such as vaccine mandates, or generous pandemic unemployment benefits – Goldman Sachs warned in November that the movement posed a “long-run risk” to labour force participation.

“We maybe consider that there might be an alternative to living our lives in thrall to the wealthiest among us, serving their profit,” University of Iowa professor Benjamin Hunnicutt, a whose books on the history of work are featured in r/antiwork’s library, told the Financial Times.

“Maybe there are other things to do with our lives than piling up profits for those that are ultra-rich, and taking that time, reclaiming that time.”

“Many have chosen to live the life in more accordance with what they value. If their workplace and their work environment doesn’t align with that then there is an opportunity for them to look elsewhere.”